this is my second update on my Summer of Code project.
As planned in the previous report, I spent the past two weeks implementing notification integration in the lock screen, and this is the result:

(thanks to Luca for accepting to appear in the screenshot)

As you can see, resident notifications, such as those created by Rhythmbox, are shown in full, and can be interacted, while persistent notifications are grouped by source, with a message counter.

Also, I worked to update the appearance of the unlocking dialog, to fully match the mockups: 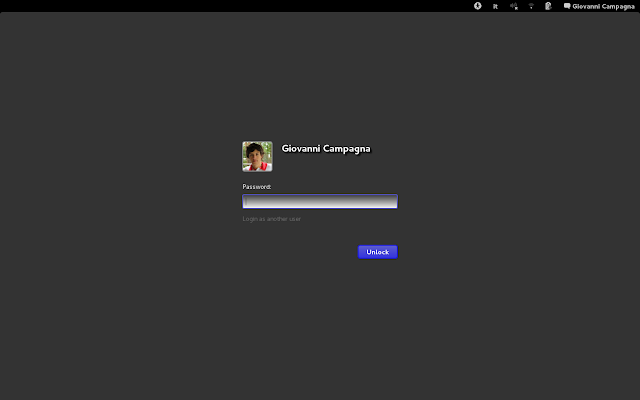 The next week will probably spent on two parallel directions.
On the one hand, I'll work to fix any bugs that should appear, and to integrate suggestions and comments from code review; as an example, I was already told to try using ClutterDragAction for the curtain behavior
On the other hand, I'm going to help with the new lock screen panel (GNOME bug 658660). This in particular will be needed to control the visibility of notifications, as it was decided that the full notifications panel is out of scope for this project.

See you in two weeks!
Pubblicato da Unknown a 07:31